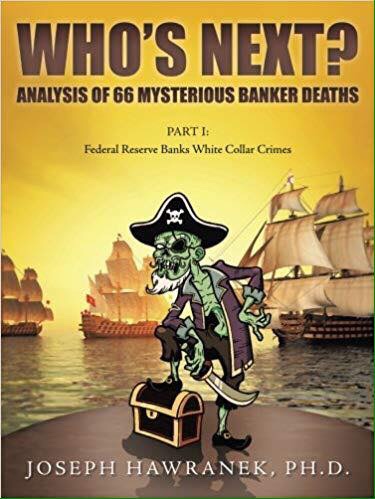 “Modern banks represent an armada of privateer pirate ships that raid upon the ten trillion dollar / day digital flow of money about the world. When exposed and “fired upon at close quarters with Man of War” known as legislative investigatory committees, they panic and run for cover. They do this in various ways; one way could be to eliminate any of their officers that have knowledge of their previous law breaking – – – After all, “Dead Men Tell No Tales”. This analysis sizes the “booty” on an annual rate and analyzes the 66 banker deaths. There are currently 5 investigative committees or “Man of War” investigating the banks. The Regulatory agencies are toothless since the FED directly or indirectly controls them. They stay in the safe harbor, called “Do Nothing”. Many of the 66 people dead are traders, former traders, risk assessment officers or data processing experts. JP Morgan (19), ABN AMRO (2), Citibank (2) and Deutsche Bank (3) were all represented with “suicided” executives. Both Alan Greenspan and Henry Morgan were privateers whose owners sponsored their pirating. Both successfully brought booty home to their sponsors, both were rewarded with Knighthoods. Greenspan’s FED Armada takes about $14.5 trillion per year in booty from the citizens of the world. The solution is in legislation and the removal of the FED and the removal of the FED being in charge of all regulatory agencies.”

Joe was raised in Virginia and Pennsylvania and put himself through college on scholarships and multiple jobs. He attended VMI, UVA, and the UPA. In the air force, he worked as a launch officer on the Minuteman program and participated in over fifty launches at Cape Kennedy. After the USAF, he joined IBM and worked on the Saturn V Moon Rocket launch, writing checkout software before returning to school at the UPA Wharton School, where he earned a PhD in economics. During his career, he launched many new products, including point of sale, handheld computers, network communications software, and encryption devices. He ran his own high-tech consulting business for ten years. He retired to Las Cruces, New Mexico, where he cofounded a tea party, Las Cruces Sons of Liberty and created three blogs: an educational site, a personal blog, and a Vertical Rising blog. He has published over thirty-five articles on geopolitical topics on these three sites.

It doesn’t get any more Orwellian than this: Wall Street mega banks crash the U.S. financial system in 2008. Hundreds of thousands of financial industry workers lose their jobs. Then, beginning late last year, a rash of suspicious deaths start to occur among current and former bank employees.  Next we learn that four of the Wall Street mega banks likely hold over $680 billion face amount of life insurance on their workers, payable to the banks, not the families. We ask their Federal regulator for the details of this life insurance under a Freedom of Information Act request and we’re told the information constitutes “trade secrets.”